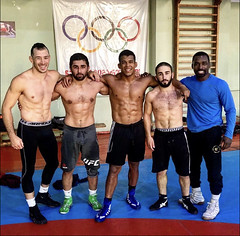 Nestor Taffur brings a wealth of both international and collegiate wrestling experience to the NYC RTC. Following a successful high school career at Bound Brook High in New Jersey, Nestor went on to wrestle for Boston University where he became one of the program’s most successful wrestlers. A four-year starter, Taffur went 119-47 as a member of the Terriers to become the all-time wins leader.  While at Boston University, Nestor became an EIWA Champion, 2x NCAA Qualifier and fell just one win shy of All-America status at the 2014 NCAA Championships.

Evan Henderson attended Kiski Prep in Saltsburg, PA.  A three-time Pennsylvania State Champion Evan Henderson continued his wrestling career at the University of North Carolina at Chapel Hill, where he wrestled for the Tar Heels. While there he collected a 125-35 career record and achieved All-American status twice. Along with that, he was a four time NCAA qualifier and a two-time ACC tournament champion.  After graduating from UNC he joined the Campbell University wrestling staff as an assistant coach in the 2016-17 season while continuing his efforts on the senior freestyle circuit.  After a year with the Fighting Camels at Campbell University, he joined Badger RTC in Madison, Wisconsin.  After a brief stay in Wisconsin, Evan took the opportunity to join the NYCRTC and train under coaches Kendall Cross and Valentin Kalika.

Mitch Finesilver joined the NYCTC at the start of September 2019 after graduating from Duke University where he was a 2019 NCAA All American and ACC Champion. While at Duke, he was a 4x NCAA Qualifier, 4x ACC Finalist, and 2x Southern Scuffle Finalist. During Mitch’s senior year he garnered NCAA academic All-American honors and was selected the ACC wrestling scholar athlete of the year. He graduated in May 2019 with a bachelor of science in Evolutionary Antropology.

Mitch is originally from Greenwood Village, CO and has 3 other brothers (Zach, Matt and Josh) who competed with him while at Duke.